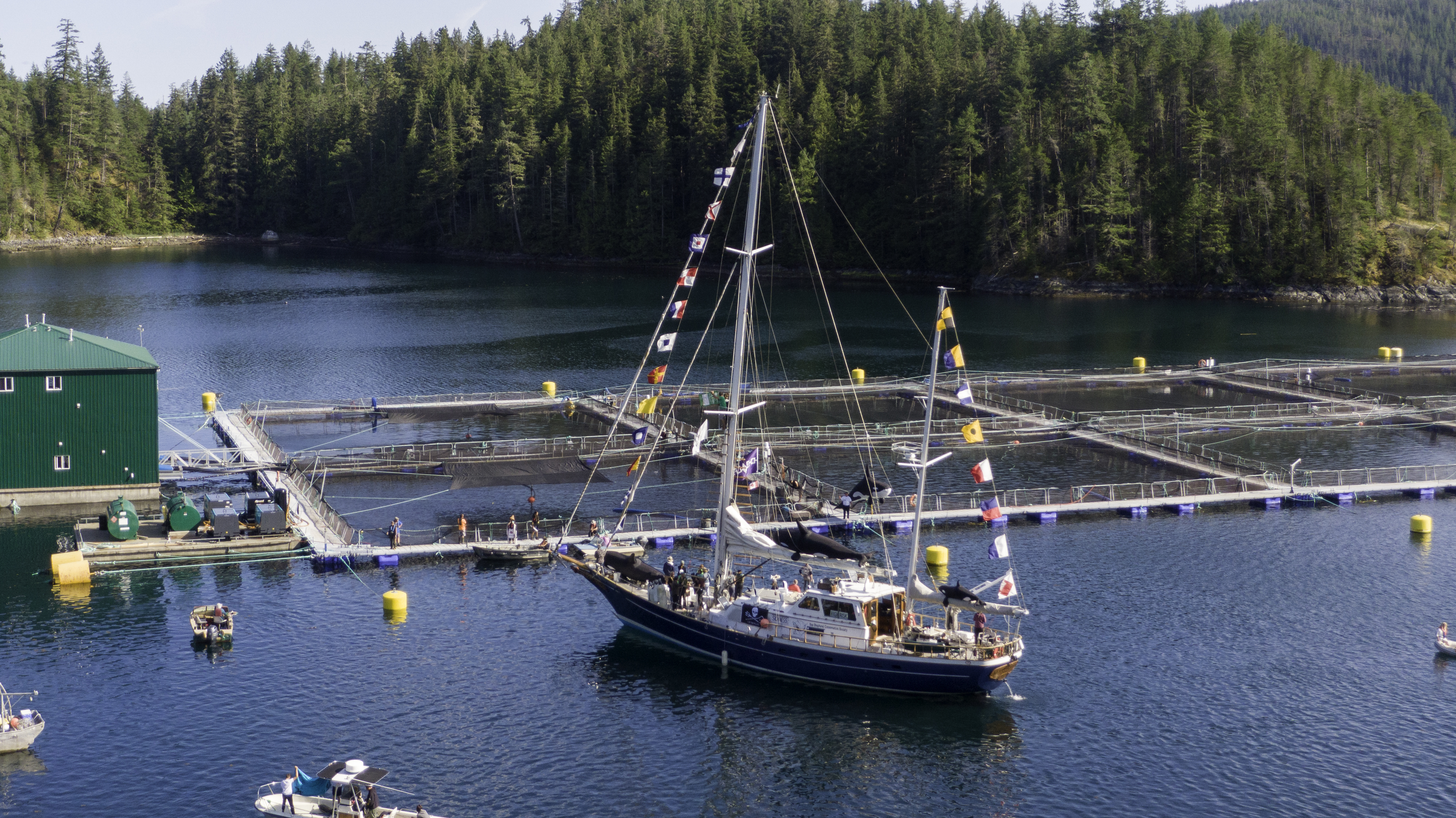 Pamela Anderson and First Nations Board Salmon Farms in BC

Pamela Anderson and her mother were among the guests onboard the R/V Martin Sheen, as well as Green Party members including MP Paul Manly and Tsastliqualus Ambers, Ma’amtagila matriarch, grandmother and indigenous rights activist from Yalis (Alert Bay).  Pamela Anderson is from Ladysmith on Vancouver Island and has recently returned to the Island to settle after living abroad in France.

“Things were a lot better 30 years ago, before the fish farms were here, so I think it has a lot to do with the fish farms that wild populations of salmon have decreased,” said actress and activist Pamela Anderson.  Adding, “they’re finding so many horrible things in the fish farms, including sea lice and deformed fish. We want to save this beautiful coast of British Columbia, it’s the most beautiful coast in the world.  I’m happy to be home and helping where I can.” Ms. Anderson concluded.

During the transit through Seymour Narrows, Chief Quocksister Jr. invited Pamela Anderson to board the fish farm along with his family and First Nations members, and she accepted.

The flotilla arrived at the Grieg Seafood operated fish farm in Barne’s Bay in the afternoon and was greeted by more boats from the surrounding area friendly to the cause, increasing the number of boats to 12 vessels.

Sea Shepherd crewmembers fitted Pamela Anderson with a head-mounted camera as she was shuttled to the farm with the First Nation boarding party.  On the farm, she observed deformed and sick fish in the pens.  She operated a second camera on a pole, plunging it into the pens to record the diseased looking fish. Pamela and Chief George were able to record images of deformed fish, fish with large pieces missing from their bodies, as well as fish swimming sluggishly.  Sluggish behavior in salmon is one of the most common symptoms associated to heart and skeletal muscle inflammation (HSMI), a disease cause by a Norwegian virus called piscine reovirus.  BC’s salmon farm industry admits that 80% of their fish is infected by this virus.  There are no studies to know if this virus can affect humans, despite farmed salmon being consumed raw by humans as sushi around the world.

After seeing the farm and the farmed salmon first hand, Anderson said, “people just don’t know, they don’t realize the fish that they’re eating.  I wouldn’t trust where it is from, if you are eating sushi, you might be eating some of this diseased, lice riddled fish.  I really get it loud and clear now, just being on the farm and seeing that – this is disgusting, you don’t want to eat anything like this.”

Upon returning to the R/V Martin Sheen, Pamela told her mother never to eat farmed salmon. Grieg Seafood had three employees present on the farm.  They tried to engage the boarding party with rebuttals to the body of science that has been produced on the impacts of salmon farming. No one was aggressive or violent from either side.

Captain Lockhart Maclean, Director of Campaigns and Ship Operations at Sea Shepherd said, “being greeted by boats as well as orcas near Maud Island, en route to Okisollo Channel highlighted the importance of removing these salmon farms as soon as possible from the migration routes, foraging grounds and habitat of both wild salmon and orca”.

Opposition to salmon farming has become global in recent years as people fight to protect the last wild salmon runs from extinction.