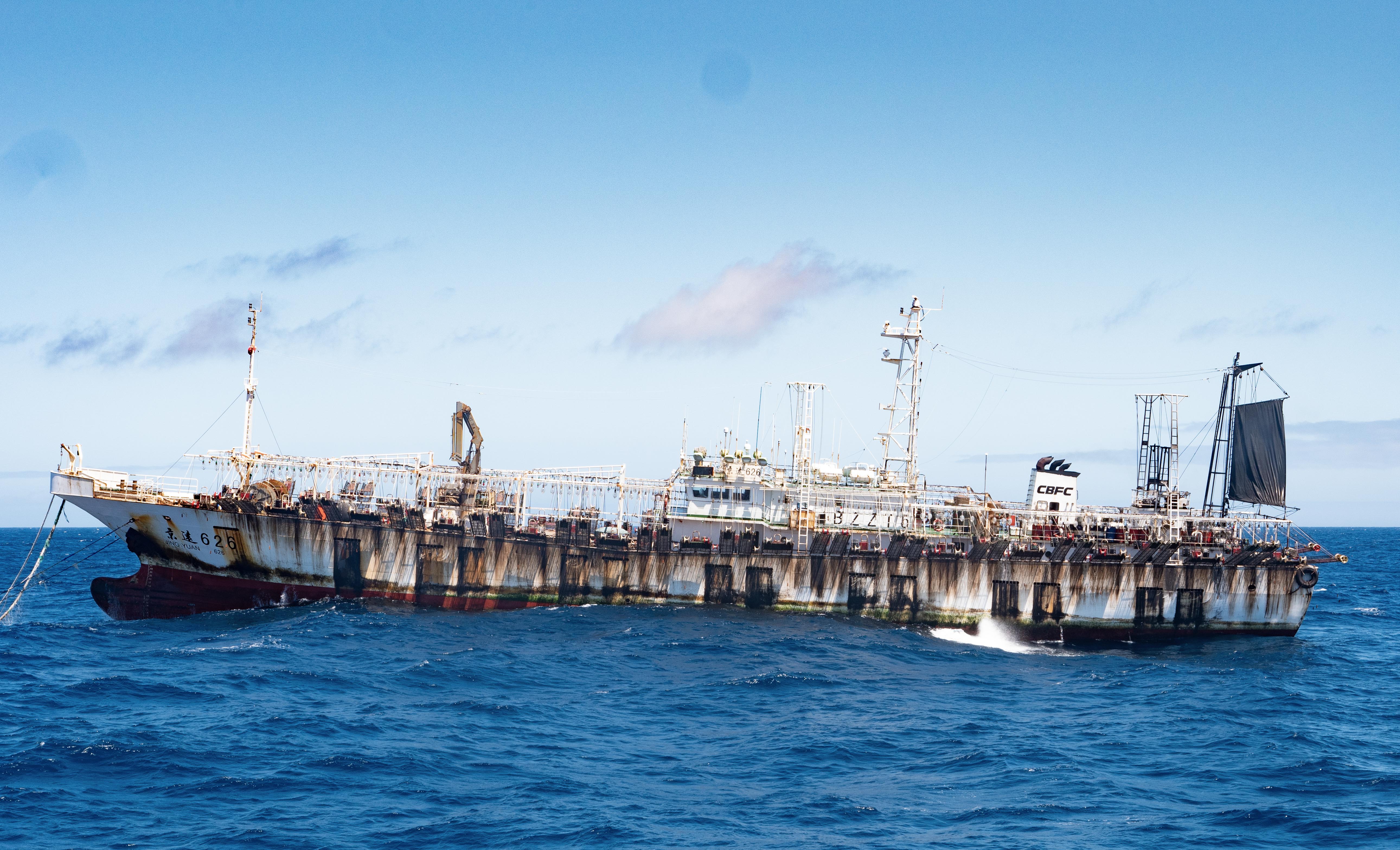 On the 24th of September, The Associated Press and Univision released “Great Wall of Lights”–a landmark investigation into the Chinese squid fleet–after two journalists spent 18 days on board the Sea Shepherd vessel Ocean Warrior observing thirty notorious fishing vessels in the High Seas, an area outside of any national jurisdiction.

Sea Shepherd’s shocking findings will be released in a mini-documentary titled “Distant Waters”, to be released on the 30th of September. ( See the trailer above)

In 2020, a fleet of more than 300 Chinese squid fishing vessels garnered extensive international media attention when they were detected fishing near the border of Ecuador’s sovereign waters that include the Galapagos marine reserve, raising concerns of illegal, unreported, and unregulated (IUU) fishing.

The fleet was targeting the jumbo flying squid, a species for which the conservation status is “data deficient” due to insufficient information on abundance and distribution; and a critical food source for many species including the critically endangered hammerhead shark and the Galapagos fur seal.

Over the past few decades, the Chinese distant water fishing fleet has become the world’s largest and ranks first in the prevalence of illegal fishing by fishing countries. Its focus on squid fishing is a recent phenomenon, driven by the decline of finfish species. In a process known as ‘fishing down the food web’, when top predators like sharks and tuna are removed from an ecosystem, fishing operators target species that were formerly less lucrative.

As it’s not possible to confirm the true identities of these vessels without documenting them in the field (known as ground truthing), Ocean Warrior set sail from Callao, Peru on the 13th of July to track down and expose the notorious Chinese squid fleet.

Of the 29 squid jiggers documented, 24 had either: a history of forced labor allegations; past convictions for illegal fishing; a track record of using multiple electronic identities to elude monitoring organization; or operated “dark”, turning off their mandatory location transponders. Sea Shepherd also intercepted a refueling tanker managed by an affiliate of a company accused of violating United Nations (U.N.) Sanctions on North Korea.

Refueling tankers allow the Chinese squid fleet to stay out for long periods at sea instead of making port visits, increasing the risk of labor abuses. When interviewing an Indonesian fisher on board the squid jigger Chang Tai 802, the fisherman told the journalists and Sea Shepherd crew, “I’m stuck here” and “I want to go home”. Almost a year and a half after the World Health Organization (WHO) declared Covid-19 a global pandemic, the fisher asked the Associated Press journalist, who is American, if the virus had reached the United States yet–that is how long he’d been out at sea.

Alarmingly, the South Pacific Regional Fisheries Management Organization (SPRFMO), the inter-governmental organization responsible for managing the squid fishery in the High Seas, has not placed a single squid jigger on its “blacklist”. This include not listing Hua Li 8, a Chinese squid jigger that has been detected fishing illegally in the waters of Argentina and is suspected of illegal fishing in Peruvian waters; was arrested by Indonesian authorities who determined that the crew were victims of human trafficking; and was the subject of an International Criminal Police Organization (Interpol) Purple Notice. Hua Li 8 continues to be authorized to fishing in the SPRFMO convention area.

Sea Shepherd’s Distant Waters will unmask the Chinese squid fleet while calling for action to get unscrupulous squid jiggers blacklisted.